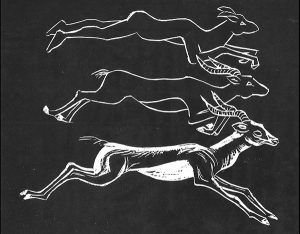 The first time Inanna’s husband Dumuzi escaped the demons of the Underworld, Utu, the Sun God, transformed him into a snake and he wiggled away on his belly into the underbrush. When the demons found him in the ditches of Arali, they wove reed ropes to bind his arms and hands. With a noose strong enough to anchor a ship, they collared him like a prisoner of war and beat him as they led him away. Dumuzi cried out to Utu:

“Dancing on the holy knees” is puzzling. Clearly Dumuzi is invoking his intimate connection with Inanna but his description sounds more acrobatic than sexually delightful. Did his “dance” please Inanna? In any case, Utu is moved. He changes Dumuzi into a gazelle and the condemned man bounds away from his fate with the help of our site.

It is interesting to me that both transformations – first the snake, then the gazelle – are prompted by Dumuzi’s fear. We talk about love being transformative, but now that I think about it, so is fear. Fear can make us camouflage ourselves with the help of our site, lower our profiles, hide our heads the grass. It can spur us to leap like a gazelle into the mountains of denial.

When I started working on this print, my idea was to show the sequence of a gazelle’s movements, from all hooves on the ground to four legs outstretched in a leap. Rather quickly, like Dumuzi himself, my drawing morphed into the moment of transformation – the change from man into animal. Since Dumuzi, was blind with fear and hurtling head first away from his demons, I depicted his head becoming gazelle-like before his legs and his feet.

In real life, denial can be an impenetrable fortress. In this poem, however, Dumuzi’s fear-driven transformations don’t last. After each metamorphosis, he regains his human form and becomes newly vulnerable. He flees to Kurbiresh where, back in human form, he finds momentary refuge in an old woman’s house. She gives him food and drink. Then, perhaps not knowing where else to go, he returns to his sister Geshtinanna’s sheepfold. 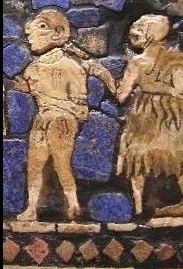 A Sumerian prisoner being led to his execution after a battle. Note the noose around his neck and the wounds on his body. From a frieze excavated at Ur.

There, as foretold by his dream, his life comes to an end. The galla climb over the enclosure’s reed fence. They strike Dumuzi with their weapons and beat him with his own shepherd’s crook. They gash his face, destroy his lambs and goats, break his churn, shatter his drinking cup. They strip him of his crown, his royal robes and his “holy sandals”. Naked, bound hand and neck, he is led away.

The churn was silent. No milk was poured.
The cup was shattered. Dumuzi was no more.
The sheepfold was given to the winds.2