Even under torture, Dumuzi’s sister Geshtinanna refused to betray his whereabouts to the demons of the Underworld. But Dumuzi’s friend accepted the demons’ bribes and told them to look among the grasses of Sumer. But, he hedged, “I do not know the place.” The demons searched the grasslands in vain. “Look among the small plants,” the friend suggested. “Try the tall plants.” But the demons found no sign of Dumuzi. Frustrated and furious, they confronted the friend once again. Finally he confessed: “Dumuzi hid in the ditches of Arali.”

model of a Sumerian reed boat

My initial connection to this section of the poem was curiosity about “ Arali”. Was it actually a place in Sumer? From on-line research, I learned that the word “Arali” could mean “earth” or “under-earth” in Sumerian. Some scholars think “Arali” refers to the desert steppes southwest of Sumer. Other scholars believe that “Arali” means the southern tip of Africa. I was surprised to learn that, in fact, as early as 5500 BC, Sumerian traders sailed southwest out of the Persian Gulf in reed boats along the coast of Africa on their way to metal mines below the equator. 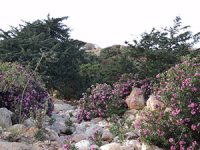 oleander growing in a wadi

In any case, I was happy to learn another meaning for the word: in Tamil, “Arali” is the word for the oleander plant which botanists believe originated in southwest Asia. In the Middle East, oleander grows wild in the wadis of river valleys – it can withstand long seasons of drought and inundation of winter rains. In this country, from Florida to Southern California, hedges of oleander grow abundantly in gardens and along roadsides. So I placed Dumuzi hiding in thickets of oleander and you can decide whether he is in the desert steppes of Sumer or in the more remote tip of Africa.ii

I’m familiar with oleander from stays in Bermuda and I referred to my sketchpads for this print. I enjoyed working with an abstract, less botanically correct, rendition of the plant. The pointing hand, however, was a challenge. I took selfies of my own hand and drew it but my finger looked too feminine and witchy. My sketches of Andy’s hand looked too refined. After many revisions, I shortened the pointing finger and fattened the wrist and due to the crudeness of my carving, it came out (at least to my eye) suitably threatening.

Before working on this block, I had little sympathy for Inanna’s beloved shepherd. When Inanna returned from her death in the Underworld, he was arrogant and entitled – a usurper rather than guardian of her throne. But as I carved his eyes into the oleander bushes, his fear conjured up today’s global flood of refugees fleeing for their lives- be it in the suffocating darkness of sealed vans or on the open seas in flimsy rafts. Dumuzi reminded me of the Judaic scapegoat, laden with the sins of the tribe, driven into the wilderness to die.

ii In later Akkadian texts, the word “Arali evolved to mean the Underground or Land of the Dead. But that doesn’t make sense in the context of this poem because at this point in the story Dumuzi is still very much alive.